The new Construction Viz records management feature of our construction form apps builds on Microsoft 365 and SharePoint to add capabilities optimized for construction project management. Read on to learn more.

Construction organizations generate a significant amount of information on projects. Everything from documents to construction forms is collected, organized, reviewed, and stored day-to-day. Once final, all these various materials need to turn into records.

Microsoft defines a record as follows:

“A record is a document or other electronic or physical entity in an organization that serves as evidence of an activity or transaction performed by the organization and requires retention for some time period.”

Microsoft 365 and SharePoint Online includes robust records management functionality by default, allowing the ability to manage the entire lifecycle of files. You can set up information management policy workflows to convert files into non-editable records based on retention codes. The same workflows can determine when files have met the retention schedules and dispose of those records. You can find out more about SharePoint Online records management here. 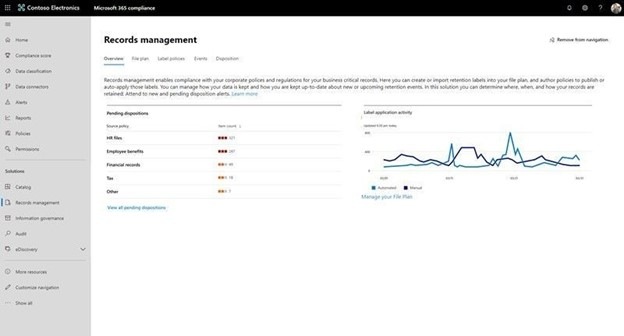 Since Construction Viz deploys into Microsoft 365 SharePoint Online, you can already leverage SharePoint's default records retention for any documents generated in our platform. The new records management feature that we've added to our Construction Viz form apps complements SharePoint by enhancing its record retention functionality for construction projects. Creating a record is simple with our tool's “Create a Record” option which makes a form read-only and restricts edits to only system admins. Construction Viz captures when a user converts a form to a record to meet compliance requirements and provide additional reporting. Submittals are staples on every construction project as a standard communication tool between contractors and the owner, construction manager (CM), or general contractor (GC) for contractual deliverables. The submittal process involves contractors completing a submittal form with the necessary metadata like project name and package, attaching the required documents, and sending it to the owner/CM/GC for review and approval. It’s a pretty straightforward process, but larger organizations have more stringent compliance, reporting, and scheduling requirements for adhering to a contractual submittal register.

We are excited to announce a new Construction Viz Submittal Enterprise Form, a variant of our standard Submittal Form, to address this need. The new enterprise form extends our lineup of existing construction project form apps.

So how is the enterprise version different from our standard Submittal form app? Enhancements to the submittal form We designed the Construction Viz Substantial Completion form app to streamline getting your project to the finish line with greater efficiency and consistency.

Substantial completion is the stage of the project where portions of work are sufficiently complete. In other words, it marks the point at which constructed items become assets, start depreciating, and are potentially handed off to the operations and maintenance teams for support. It’s also the time to collect warranties and ensure all punch list items are complete.

The owner and construction or general manager typically document achieving substantial completion in an email exchange. As we all know, email is the preferred communication tool on construction projects, and it will not go away soon. But email is not the most effective way to manage critical information at this phase of the project.

The Construction Viz Substantial Completion form app makes the turnover process more efficient and easier to manage for all parties involved. The user can track details, warranties, and punch list items for each significant area of scope, including the value outstanding and when each will be complete for turnover.  The user can run a G704 Certificate of Substation Completion report for physical signature and record retention at any time. The challenge with traditional email correspondence is responsibility and progress management. Construction Viz solves this by capturing ownership within each punch list issue and displaying that information in interactive form status dashboards, ball in court grids, outstanding response log reports, and user alert notifications. And emails are automatically generated for individual users and distribution lists for review and acceptance. Get just the construction forms you need

The Substantial Completion form is part of a full suite of construction apps available for Construction Viz. You can mix and match the forms you need for your project workflow.

All Construction Viz form apps are extendable with additional components, including:

Schedule a free consultation to see how we can help you get your project to the finish line with Construction Viz.

Our latest Construction Viz feature lets project team members mark up images on any device with or without internet access.

Adding images to a daily report, safety incident, or punchlist is critical to documenting work completed in the field and identifying any issues for potential corrective action. Construction Viz makes the process simple, enabling users to take photos with any device, with or without an internet connection, and attach images directly to the form. Our Media Map Component automatically plots the image and the location where it was taken on a geospatial map and adds this information to the form. Users can easily add comments, waypoints, and even measurements as a layer to the media map.

And because Construction Viz is a progressive web app (PWA), this is all done without users ever installing an app on their devices.

But what about marking up the images?  Our users told us that marking up images would be a handy feature and make Construction Viz's data capture even better. We listened. Read on to learn about his useful new capability.

We expanded our Image Uploader Component for construction forms based on user feedback to add image markup capability and further simplify the entire process. Here is how it works:

The updated Image Uploader Component can be enabled in any one of our apps or can be added to a custom app as needed.

This new functionality enhances the entire data collection and documentation experience by extending what's possible for field workers. Also, since Construction Viz stores all of the data to your Microsoft 365 SharePoint, your project information is available for further reporting and workflow using the Power Platform.

We expanded our Image Uploader Component for construction forms based on user feedback to add image markup capability and further simplify the entire process. Here is how it works:

The updated Image Uploader Component can be enabled in any one of our apps or can be added to a custom app as needed.

This new functionality enhances the entire data collection and documentation experience by extending what's possible for field workers. Also, since Construction Viz stores all of the data to your Microsoft 365 SharePoint, your project information is available for further reporting and workflow using the Power Platform. 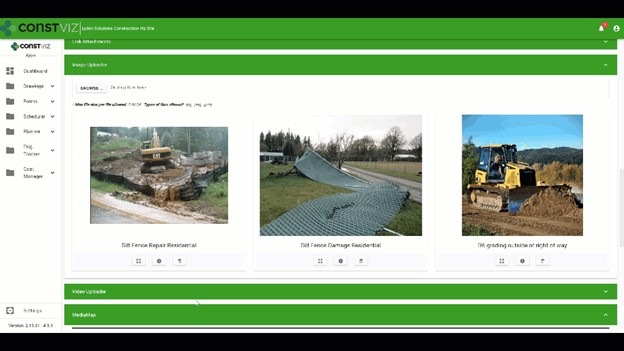 Get a demo of Construction Viz today

Contact us for a no-obligation consultation and demo today to learn how Construction Viz can help your team better manage your construction projects.

Organizations managing major construction projects typically use multiple project and information management systems, including systems for document storage, task scheduling, contractor correspondence, and more. Since most of these systems reside on external hosting, it is challenging to efficiently archive project data.

If you use Microsoft 365 to manage your projects, Construction Viz has your project data archival covered with our Form Archiving Wizard.

With only a few clicks, the Construction Viz Form Archiving Wizards lets you create an archivable version of any construction form and all its attachments. The easy-to-follow wizard walks you through picking which files to attach, the order they should print, and what to name the final file. Construction Viz automatically converts all form data and files to PDF format and organizes them into a binder that you can save locally, route in a Power Automate workflow, or save to another archiving system.

See the screenshots below for a preview of the Construction Viz Form Archiving Wizard in action.

Run the PDF with attachments report within a form. Select the attachments to include in the report PDF. We anticipate this feature will save a significant amount of time for your document control team. The wizard will also allow you to easily share PDFs of forms, with their attachments, to contractors that might not have access to your Microsoft 365 tenant.

Manage Your Projects with Construction Viz and Microsoft 365

And head over to LydonSolutions.com for more information if you are interested in a custom construction project management solution using Microsoft 365.

Microsoft will end support for its Infopath 2013 offering in July 2026. Here is why Construction Viz is an ideal form and project management solution for construction organizations looking to transition away from Microsoft Infopath.

Microsoft released Infopath in 2003 as a standalone forms-creation and data-gathering application, and it quickly became the de facto form development tool for Microsoft SharePoint. The application, which empowered end-users to develop robust forms without needing to be an IT developer, quickly grew in popularity. With a lot of research and trial and error, you can build quite powerful forms that can also be extended with custom code, if needed.

As of 2013, Microsoft InfoPath has not received any software enhancements. Microsoft has moved in a different technology direction with the release of Power Apps and Forms, which better fit its Microsoft 365 cloud platform. Although InfoPath remains in heavy use today, Microsoft has indicated it will end support for the application in July 2026. While that date might seem far off, construction organizations need to start looking at transitioning to other form technologies.

You might assume that Microsoft Power Apps and Forms would be your organization's best bet moving forward. But a web-based form is not just an electronic version of a piece of paper. To deliver a form solution, you have to assess the business need from a 360-degree perspective. That means considering permissions, reporting, integrations, attachments, metadata, offline capability, logs, search, workflows, UI/UX, deployment, and backups. These areas must work together seamlessly to deliver an end-to-end construction solution that does not disrupt the business process, is easy to configure and implement, and can be supported and customized.

This is why our Construction Viz form apps are an ideal solution for construction organizations looking to transition from Microsoft Infopath.

We designed our lineup of Construction Viz form apps based on our over 11 years of developing forms in InfoPath for the construction industry. Our goal was to remove any complexity in delivering forms and ensure that we had all of the bases covered from permissions to workflow in a turnkey solution.

Each Construction Viz form is an app that can be licensed individually and deployed quickly into Microsoft 365 and SharePoint. The forms are pre-built with construction-specific fields and features but are still customizable by an administrator without coding or the need to be an IT pro. And while the forms are all standalone solutions, you can combine them to take advantage of additional features like cross-linking between related records, unified notifications and reminders, streamlined workflows, and more.

Best of all, Construction Viz fully integrates with Microsoft 365, so if you already have solutions built in the Power Platform, Teams, or SharePoint, you can leverage them alongside our apps to create a truly customized solution for your organization.

If you need help setting up Microsoft 365 for your construction organization, check out our managed services at LydonSolutions.com. Capture Construction Project Reviews and Approvals on Just About Everything! Sign up to receive helpful tips for construction project managers as well as updates about Construction Viz. 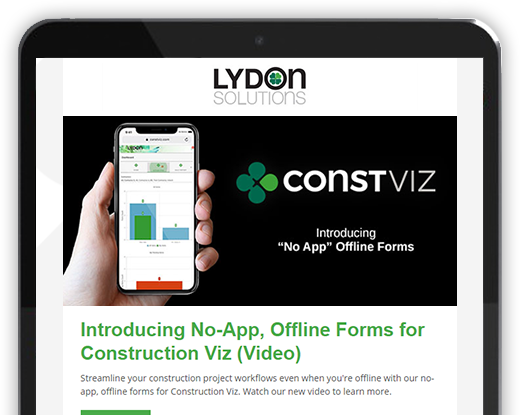 Sign up to receive helpful tips for project managers and updates about Construction Viz.